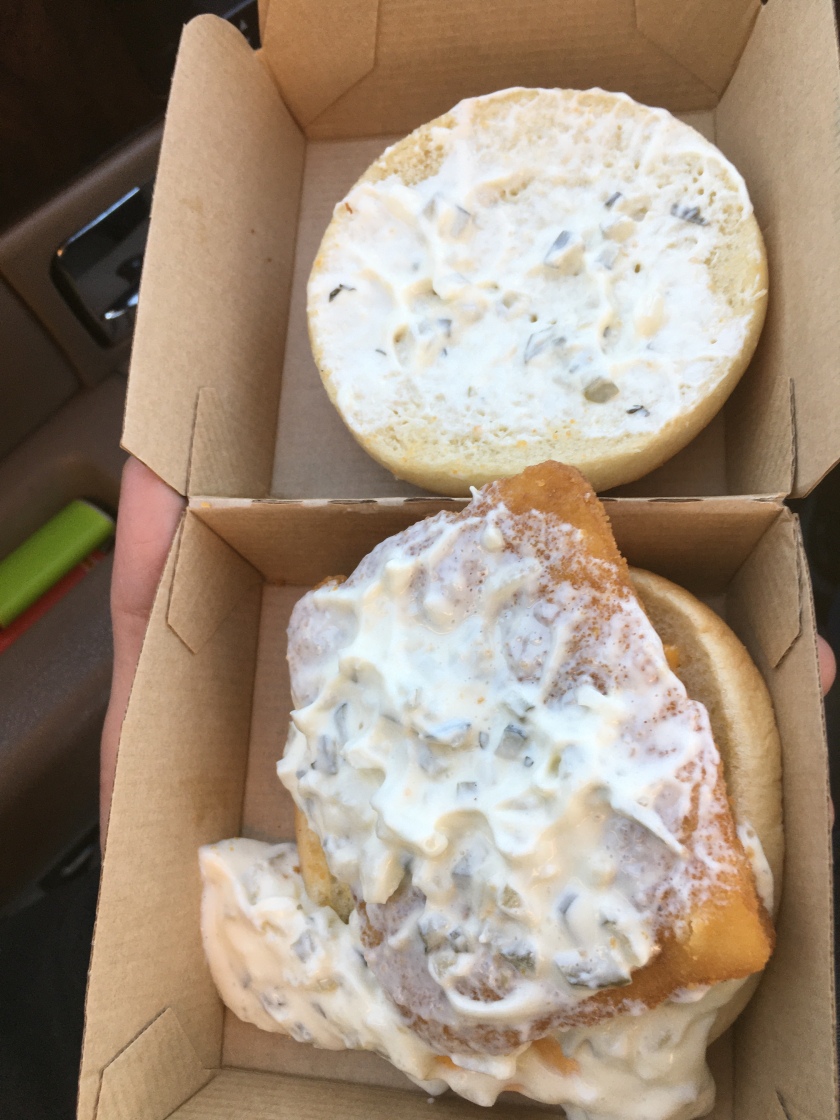 Yesterday my daughter and I went through the drive-thru at a local fast food restaurant. We ordered fish sandwiches and, as always, I asked for extra tartar sauce. After we pulled out onto the road, I opened my box to find a ridiculous amount of tartar sauce. I took a couple of pictures, probably stated it was ridiculous, wiped some off into the box and started eating.

Later I posted the pictures on Facebook with the caption, “I guess extra tartar sauce means be a jerk”.

People commented and gave mad, sad and wow-face reactions. I’ve been told I should contact the manager about it by several people. To be honest, I just don’t want to mess with it.

Maybe that is part of the problem with the world. Maybe if we quit ignoring things we know are wrong, the world wouldn’t be in the shape it’s in today, but I guess there is another plan- you’re reading it.

After a while of receiving notifications on this particular post, I thought why did I post that? I often think it’s annoying to see people post the bad attitude stuff and then there I go doing it.

Why add to the madness of making other people irritated and aggravated? That’s just adding that much more “tartar sauce” to the world when we already have enough to make us angry and irritated.

Well of course you know I’m going to relate this to Scripture so I thought this fit pretty good here.

19 So then, my beloved brethren, let every man be swift to hear, slow to speak, slow to wrath; 20 for the wrath of man does not produce the righteousness of God. James 1:19-20 NKJV

Maybe the person in charge of the tartar sauce isn’t a brother (or sister) in the Lord, that’s irrelevant, but what if I would’ve gone inside calmly and said, “Dude, how do you even feel right about sending this out?” Maybe I should have, but again, I didn’t.

The thing is, we are probably two different people. That person is probably some kid with no self-control (tartar control, whatever you want to call it) and I’m a grown woman who is, over time, learning self-control. Apparently I haven’t mastered it yet since I made a post about it but I’m not going to get under the bus about that either. Why? Because I see growth. It is only because of the Lord that I didn’t storm in there like a raging lunatic, cause a scene and cuss the cook, the manager or anyone else that could’ve been in there. Thank God I’m not that person anymore!

Last week when we were out of town, I went out the entrance of a fast food place and a man rolled his window down and cussed at me. I hollered back, “Oh good grief stupid. It’s not like you couldn’t get through.”

That’s not OK. Right after that I told my husband and dad (who were with me) I shouldn’t have joined his anger game. I needed to exercise self-control.

If I caused you to get distracted from what’s really important, for that I apologize. In my mistakes there are many lessons and I have to make sure pride doesn’t get in the way of me fixing it. A chance to redeem myself from my actions? It’s called grace.

So…next time something comes up, I need to pause and remember: hold the tartar sauce.

I am a wife, a mother and a Christian author. My first book "In Every Situation, God is There" was published in 2014. It's currently unavailable, but I am working on getting it back on the market soon. I enjoy spending time with my family, writing and doing crafts. I clean houses for a living, and have for over 13 years. It provides me with quiet time to reflect on my own messy life. I find peace spending time with the Lord and only have peace when I am walking with Him. Without Him, I'd never make it in this life. View all posts by Priscilla Bohannon

2 thoughts on “Hold the Tartar Sauce”